The Pandemic as a Musical Opportunity
The musicians of the cassiopeia association aren’t exactly known to complain and remain passive during hard times – on the contrary: They visit and comfort the sick with heartwarming tones.

Niklaus Rüegg – A new initiative of the cassiopeia association proves that crises may cause more than just misery, distress, and hopelessness. The association creates and operates «interactive, participative and educational projects as part of its cultural contributions» – as stated on the association’s website. A special event sparked a simple yet tempting idea in violist Mirjam Toews. As the leader of a small chamber music series, she had received a donation from Spitex in Basel, Switzerland during the pre-Christmas season 2020. Toews reflected about ways to return the favor. At first, she intended to give away a CD of said concert series, but then she thought about visiting the sick in their homes to play Christmas songs. «The events were heartwarming. Everyone cried», recollects Toews. On her way home from the concert, she decided to create the project 'Musik-Spitex'. What would be better than to bring some light into the lives of the lonely and sick during the pandemic, all while catering for the existential needs of musicians. As a performer herself, she had felt the destructive consequences of concert cancellations. She presented her idea to Peter Kury, leader of the Spitex Allschwil-Binningen-Schönenbuch (ABS). Kury loved the idea and immediately contacted his clients. The demand was overwhelming. Once a week between March and July 2021, professional musicians visited Spitex clients. The need 20-minutes concerts has shown no end, and «the feedback is touching», says Peter Kury.
The association is on point with remuneration: «Our musicians get paid the standard fees as recommended by the Schweizer Musikverband (SMV). We take payment very serious. If a musician requires a babysitter while performing, we’ll share the cost.»


Balm for the Soul

In April 2021, the local TV station TeleBasel aired a report about the 'Musik-Spitex'. The intense reactions toward the music of those in need of care demonstrated the depth of happiness music can reach. Mijam Toews comments: «Music helps remember positive memories tied to specific moments.» A stroke patient came to tears when hearing Toew’s performance of a Bach Suite. Upon hearing 'Pack die Badehose ein', the fans of German Schlager will even sing along. A married couple expressed their gratitude. The husband misses the old times: «Feeling lonely is a given right now. When I used to play in the village orchestra, everything was good». A piece from Rachmaninov, played by cellist Valentina Dubrovina, brings him to tears, whereas he joins in singing for the old German song 'Was kann der Sigismund dafür'. The young and talented cellist is grateful for the opportunity: «Performing and sharing emotions with the audience is vital today, both for the listeners and musicians». Dubrovina also appreciates the intimate concert setting: «There is a very personal touch to playing for an audience of two, as compared to an audience of a 1000».

Violist Mirjam Toews is also a qualified arts administrator and has a passion for organization. The mother of two purposely diversified her revenue streams. She studied viola in Karlsruhe, Paris, Bern and Oslo. In 2020 she successfully finished her degree 'Executive Master in Arts Administration (EMAA)' in Zurich. Today she performs with chamber music ensembles and as a sub for various orchestras, in addition to serving as managing director for the concert series Swiss Chamber Concerts Basel. «Since studying in Norway, driving change through music and social projects has become my priority», says Toews. Back in time, she visited nursing homes to instill hope through music in older people. Sensitized from her experiences during the Christmas 2020 season, she «perceived the many lonely older people confined to their rooms as a result of the pandemic». Apart from its youngest project, the Musik-Spitex, the association also operates in further areas. For example, the association arranges chamber music house concerts, but also pursues scholarly research. The vice president of cassiopeia, Tania Barkat, is a professor at the Brain & Sound Lab of the University Basel: «Our mission is to improve the musical listening experience for individuals with Cochlea-implants. My colleague Tania brings the scientific background, while I bring the musical background.»
The pilot project 'Musik-Spitex' with the Spitex ABS is now in its final phase. Thanks to the overwhelmingly positive experiences, the project’s concept will be expanded to all Spitex units in Switzerland.

Wouldn't that service also be something for other countries? Or does it already exist? Write us your experiences below as a comment.
We encourage our students to share their music for homebound neighbors. My personal Covid response was to document teaching tactics from numerous workshops and my own work. Because the students couldn’t play with me over Zoom I made about 100 videos with the teaching points of pieces and then they could also play with me. Now we have the vaccine I have been able to visit isolated people and give mini-concerts of a few favorite pieces. As you point out in your blog this is valuable for both the musician and the audience, even if it is just one person. I hope you will keep providing these experiences even when you are able to resume other performances. 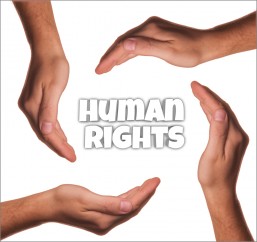 Is There a Human Right for Music?

The human right for musical participation and education is uncontested in most strata of the population. However, access to music education is not the norm, even though music has played a central role in the history of human development.
» to the blog 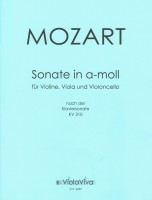 Sonata in A minor
for Violin, Viola and Violoncello
after the piano Sonata KV 310
Score and Parts
arranged and edited by
Stéphane Rougier
with preview of the complete edition
Publisher: ViolaViva

Stéphane Rougier was born into a family of musicians in Strasbourg. He grew up in a musical environment, and began playing the violin when still a child. At 14, Rougier was accepted into the Conservatoire National Supérieur de Musique de Paris, where he won prizes for violin and chamber music. He continued his studies in Germany, and soon began a career as a chamber musician and as a soloist on the violin and viola. In 1996 he was appointed the concert master of the Orchestre Symphonique et Lyrique in Nancy, and in 1999 he was made concert master of the Orchestre National Bordeaux Aquitaine under Hans Graf.
Rougier directs several festivals in France and abroad, and brings together the major soloists and chamber musicians of our day to explore an innovative repertoire together. He works in all manner of genres, from theatre to ballet, folk, eletronics and Baroque. His greatest delight is to get to know new people while exploring new horizons and sharing his musical discoveries.
» to the edition

Do you don't want to miss any news regarding viola anymore? Our monthly viola news letter will keep you informed.